Death and Her Devotion 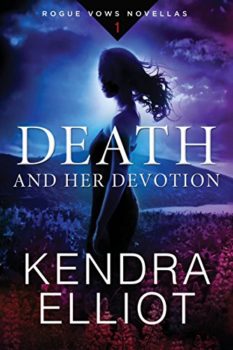 In the first Rogue Vows novella, Zane and Stevie are about to get an unexpected wedding present…and it’s a deadly one.

It should be the happiest weekend of Officer Stevie Taylor’s life. She’s finally going to marry Police Chief Zane Duncan and live happily ever after in Solitude, Oregon. But all wedding plans grind to a halt when a dead body is found at a nearby campground. A vacationing A-list TV actor has been murdered…and all hell is about to break loose.

When it comes to a celebrity murder, everyone has a motive—and everyone wants a piece of the action. As news media and paparazzi swarm their sleepy town, Stevie and Zane must dig deep to untangle a web of lies, dirty little secrets, and betrayals—and uncover the killer. But the closer they get to the truth, the deadlier their investigation becomes. And if they don’t act quickly, ’Til death do us part may come sooner than they thought.

Other Books in the Rogue Vows Series